Intelligent all-wheel drive teams up with mild hybrid combustion engines, a plug-in hybrid system and fully electric power to deliver a supreme driving experience in the new edition of the compact Sports Activity Vehicle on a glacier in Austria’s Ötztal. 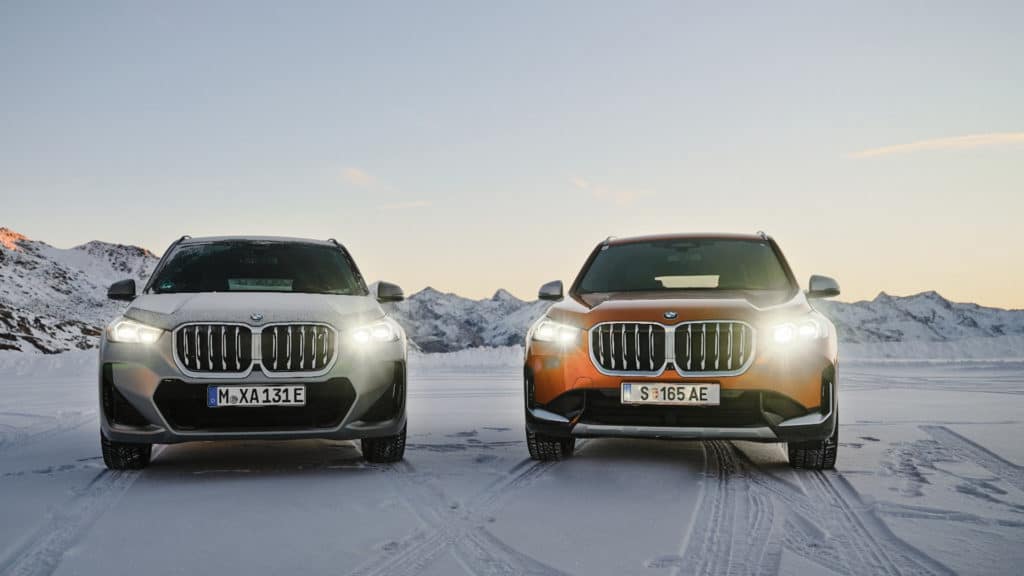 When the snow starts falling and the roads get icy, the new BMW X1 and new BMW iX1 are in their element. Their robust character profile and BMW xDrive provide all the necessary tools for the job at hand – and in winter training on the glacier above Sölden, Austria they are showcasing the benefits of fully variable power transfer to all four wheels once again. What is more, the new edition of the compact Sports Activity Vehicle (SAV) is now available with three variants of intelligent all-wheel drive. Whether it’s joining forces with mild hybrid petrol and diesel engines, a plug-in hybrid drive system or all-electric power in the new BMW iX1, BMW xDrive serves up assured progress and wintry driving pleasure on the snow-packed test routes of Austria’s Ötztal region.

Six model variants of the new SAV with BMW xDrive are now on sale. Four of these are here in Sölden to shine a spotlight on the intelligent all-wheel-drive system in all its variety. The most powerful petrol- and diesel-engined representatives of the new BMW X1 embody the transfer of drive to all four wheels – as required at any time – in its original form. 48V mild hybrid technology provides these models with an extra electric power boost, which optimises efficiency and, most prominently, sharpens power delivery.

The new BMW X1 xDrive30e (fuel consumption combined: 1.0 – 0.7 l/100 km [282.5 – 403.5 mpg imp]; electric power consumption combined: 20.9 – 18.0 kWh/100 km; CO2 emissions combined: 23 – 16 g/km in the WLTP cycle; NEDC figures: – ) is the most powerful of the two plug-in hybrid options for the new BMW X1. Here, a three-cylinder petrol engine driving the front wheels and an electric motor sending power through the rear wheels develop system output of 240 kW/326 hp. The precisely controlled interplay of combustion engine and electric motor delivers hybrid-specific all-wheel drive. At the winter test in Sölden, this is evident most strikingly in the instantaneous availability of power when pulling away and the cars’ sure-footed traction on snow-covered surfaces.

With one electric motor at the front axle and one at the rear, the new BMW iX1 xDrive30 (electric power consumption combined: 18.1 – 16.8 kWh/100 km; CO2 emissions combined: 0 g/km in the WLTP cycle; NEDC figures: – ) also offers customers a drive concept in which the transfer of power to all four wheels is an inherent element of its design. Together, its duo of electric motors generate maximum output of 230 kW/313 hp, which can be translated into driving pleasure extremely effectively on the snow-covered tracks of the winter testing facility, as elsewhere.

In the electrified drive variants of the SAV, credit for the impressive traction on display goes to a globally unique drive torque control system – an AWD-specific version of near-actuator wheel slip limitation (ARB-X). This allows the power requested by the driver to be distributed even more precisely to optimise not only the traction and directional stability of the new BMW iX1 xDrive30 and new BMW X1 Drive30e, but also their agility and driving performance. When moving off on slippery ground or driving dynamically through corners, for example, the amount of drive sent through the rear wheels is increased as required to prevent the front wheels from spinning and to enhance the car’s agility.

Improving safety and therefore the driving experience on challenging terrain, meanwhile, are driver assistance functions offered for the first time in the segment occupied by the new BMW X1. These include camera feeds sent to the control display when the Hill Descent Control and drive-off assistant systems are in use, helping the driver to navigate tricky mountain routes and negotiate ice- and snow-affected surfaces.